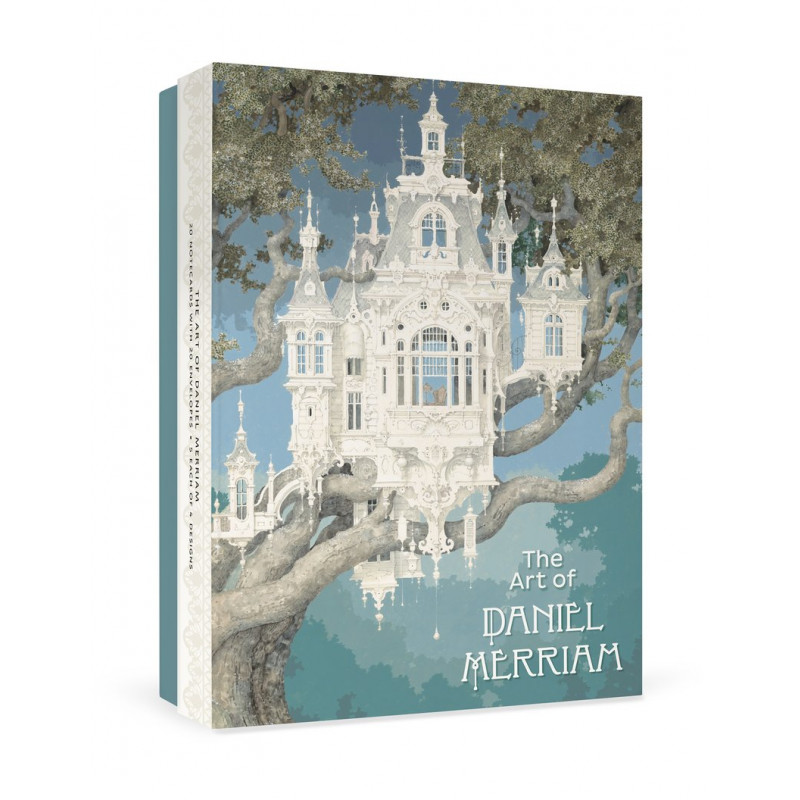 Daniel Merriam’s surreal artworks combine a romantic Victorian sensibility with a dreamlike quality. He says his paintings are vehicles for his dreams, not the product of them, so viewers can jump in and take the story wherever they choose. From a childhood immersed in music and creativity to becoming an architectural illustrator, Merriam has refined his style and vision as a painter to incorporate color, movement, structures, and fantasy in dazzling compositions—four of which are featured in this notecard set. Contains 5 each of the following notecards: Living on the Dragon’s Back, 1994 Like Honey to a Bee, 1999 The Weekender, 2000 High Altitude, 2005

Surreal. Romantic. Phantasmagorical. The artwork of Daniel Merriam (American, b. 1963) features ornately decorated Baroque buildings that are suspended in trees, crafted over waterfalls, and carried on the backs of elephants and cats. Likewise, the characters who populate Merriam’s wonderland dress extravagantly as they travel in hot air balloons and ride carriages and penny-farthing bicycles. In 2012, Merriam opened Bubble Street Gallery—an emporium celebrating creativity and the imagination in Sausalito, California—named after his painting Bubble Street. Merriam’s artwork hasn’t been confined to this gallery, though. His paintings have traveled in exhibitions across the United States, Europe, and the Middle East. As Merriam says, his audience is universal, limited only to “those who have the willingness to see with their hearts and minds.”